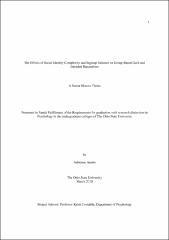 Research indicates that identification with a social group affects feelings of guilt in response to negative behaviors performed by ingroup members. The present experiment examined how social identity complexity and ingroup salience impacted group-based emotions. It was predicted that individuals with complex social identities would be willing to acknowledge feeling guilty in response to negative behavior performed by ingroup members and thus offer an apology for the behavior than would individuals with less complex social identities. Additionally, it was predicted that making multiple identities salient would increase participants’ willingness to admit wrong-doings by ingroup members. Sixty-nine undergraduate students read a news article stating that a group of students wrongfully harmed a professor. All participants completed a questionnaire measuring feelings of group-based guilt and intended reparations to the professor. Although no effects were found for identity salience, the results suggested that social identity complexity can buffer the effects of ingroup identification on intended reparations to wronged groups. Limitations and directions for future research are discussed.