The Role of Mast Cells in Fetal Wound Healing 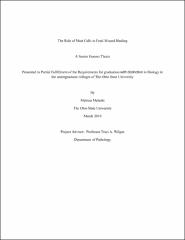