Resolution and accuracy of resonances in R-matrix cross sections 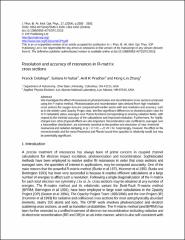 We investigate the effect of resonances in photoionization and recombination cross sections computed using the R-matrix method. Photoionization and recombination rates derived from high-resolution cross sections for oxygen ions are compared with earlier works with less resolution and accuracy, such as in the widely used Opacity Project data. We find significant differences in photoionization rates for O II metastable states, averaged over Planck functions corresponding to ionizing radiation fields, with respect to the intrinsic accuracy of the calculations and improved resolution. Furthermore, for highly charged ions other physical effects are also important. Recombination rate coefficients, averaged over a Maxwellian distribution, are extremely sensitive to the position and resolution of near-threshold resonances and radiation damping, in (e + O VII) ↔O VI + hv. Surprisingly, however, the effect on the monochromatic and the mean Rosseland and Planck bound-free opacities is relatively small, but may be potentially significant.

This work was partially supported by the US National Science Foundation and NASA. The computational work was carried out on the Cray SV1 at the Ohio Supercomputer Center in Columbus, Ohio.