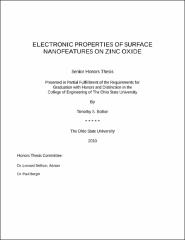 Zinc Oxide undergoes spontaneous nano-sized feature growth in ambient conditions. These features are both physical and electronic characteristics that are measurable with nanometer-resolution techniques such as atomic force microscopy, Kelvin probe force microscopy, surface photovoltage spectroscopy, and cathodo-luminescence spectroscopy. Two defects, zinc vacancy and oxygen vacancy, are associated with these nanofeatures both at the surface and below the surface. It was found that the face polarity (Zn face or O face) affects the growth of nanofeatures in several different ways: which feature is most commonly seen (rod on O, pit on Zn), whether rosette features radiate above-surface lines or trenches (above on O, trenches on Zn), and the dominating defect (O vacancies on zinc face, Zn vacancies on O). The hexagonal close-packed crystal structure of ZnO propagates to feature growth, seen by the clearly-defined hexagonal shape of pits on zinc face, by the rosette projection lines at angle multiples of 60º, and trench lines bending at multiples of 60º. In many cases, there is a strong correlation between surface topography of features and surface potential which indicates surface states, with continued (and new) growth along those states; the lack of KPFM correlation alludes to subsurface states. Advisor: Dr. Leonard Brillson