Age-Dependent Vulnerability of the Striatal Mitochondrial to 3-Nitropropionic Acid 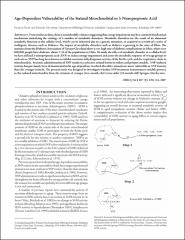 From studies to date, there is considerable evidence suggesting that energy impairment may be a common biochemical mechanism underlying the etiology of a number of metabolic disorders. Metabolic disorders are the result of an abnormal metabolic function at the cellular level, which can be inherited due to a genetic mutation, or acquired as a result of a series of multigenic diseases such as diabetes. The impact of metabolic disorders such as diabetes is growing in the state of Ohio. The statistics from the Diabetes Association of Greater Cleveland show a very high rate of diabetic complications in Ohio, where over 800,000 people have diabetes- about 1/16 of the population in Ohio. To study the effect of metabolic disorder at a cellular level, we have utilized 3-nitropropionic acid (3NP) to induce energy impairment and assess the metabolic response of two age groups to such stress. 3NP has long been known to inhibit succinate dehydrogenase activity of the Krebs cycle and the respiratory chain in mitochondria. Systemic administration of 3NP results in a selective striatal lesion in rodent and primate models. 3NP-induced toxicity has previously been demonstrated to be age-dependent, in which the older animals are more vulnerable to 3NP toxicity than the younger animals. The present study was designed to investigate whether 3NP treatment demonstrates variable potency in the isolated mitochondria from the striatum of younger (two-month-old) versus older (10-month-old) Sprague-Dawley rats.