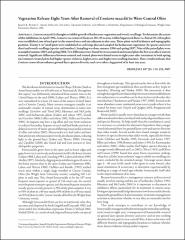 Lonicera maackii is thought to inhibit growth of herbaceous vegetation and woody seedlings. To determine the extent of this inhibition, in April 1996, Lonicera was removed from ten 30 x 30 m areas within Sugarcreek Reserve. Paired 20 x 20 m plots were established, one of each pair in the removal area and one adjacent to that area. These plots varied in history and topographic position. Twenty 1-m2 small plots were established in each large plot and sampled for herbaceous vegetation (by species and cover class) and woody seedlings (species and number). Sampling was done summer 1996 and spring 1997. Nine of the paired plots were resampled summer 2003 and spring 2004. Few differences were found between control and treated plots the first year after Lonicera removal. Significant differences between control and treated plots were found seven to eight years after treatment in both spring and summer: treated plots had higher species richness, higher cover, and higher tree seedling densities. These results indicate that Lonicera removal can enhance ground layer species diversity and cover after a lag period of at least one year.