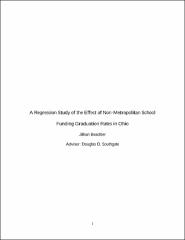 The education that students in Ohio’s metropolitan areas receive is often perceived as being sub-par because of below-average funding. Rural areas, however, are often overlooked in funding studies because data are hard to obtain or subjects are too widespread. However, approximately 20 percent of the nation’s population lives in rural areas, and I wanted to find how the state funding for those counties in Ohio affects their graduation rate. As I gathered data, a second question arose. It was impossible to look only at one factor in determining the graduation rate, so I began to study the correlation between standardized test scores (such as the OGT) and the graduation rate. I first conducted a literature review to better understand the problem at hand. Rural school graduation rates reflect a lot of factors, and I couldn’t include all of these factors in a regression equation; however, in researching the outside factors, I was able to gain a more comprehensive knowledge of how one hard-to-measure variable affects another. I then took an assessment of all public schools in Ohio using the Ohio Government Education website and selected all counties which are designated non-metropolitan. From there, I eliminated schools without adequate information, including all schools which contained any grade other than 9-12, and those who were grade 9-12 but did not give data on each area that I was studying. Finally, for counties with more than five qualifying schools I randomly chose five so that the sample size wasn’t skewed by choice of area. The reason for the selection of five schools or less per county refers back to my literature review- I knew that some rural counties are much more wealthy than others or are in closer proximity to resources that can influence graduation rate, and although these variables weren’t measureable I wanted to minimize their effect. As a result of completing the regression, I found that many of my variables were not statistically significant, meaning that their values could have come about by chance according to my chosen parameter. For instance, I set out to measure the effect that governmental school funding had on graduation rate, assuming it to be positive. However, I found that the parameter estimate was very small (school funding had a negligible effect on graduation rate) and that in fact, this result was statistically insignificant. As I progressed in my research, I also became interested in the Ohio Graduation Test (OGT) results and their effect on graduation rate. My results suggest that the effect of the OGT results on graduation rate is marginal, at best, and perhaps zero at worst. I also found that correlation between the variables was low, meaning that there was not a problem with multicollinearity, which would have made it difficult to tell which was truly having an effect on the dependent variable. The larger implications of my findings is that further studies should be conducted as to whether or not the OGTs are achieving the desired results. My regression equation did have a lot of variables and when I considered what I was testing, I saw that there were a lot of variables and thus ways in which I could come to a wrong conclusion. Because of this, I cannot strongly state that the OGT results are all correct, but there does seem to be a need for further research. In addition, additional tests could be conducted which look only at the school funding and its correlation with graduation rate, but which include more sources of funding, such as the aggregated local and state funds. The fact that the variables are not highly correlated is good, and could lead to further research and more highly refined regressions. For instance, more regression runs could be conducted in which a variables were brought in one at a time, and thus see more clearly the effects of the individual independent variables. In addition, I could also calculate the direct correlation between the dependent and independent variables by performing correlation using Excel.