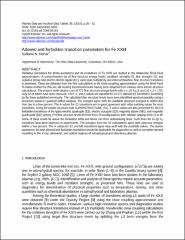 Radiative transitions for photo-excitations and de-excitations in Fe XXII are studied in the relativistic Breit-Pauli approximation. A comprehensive set of fine structure energy levels, oscillator strengths (f), line strengths (S), and radiative decay rates (A) for electric dipole (E1), same spin multiplicity and intercombination, fine structure transitions is presented. These are obtained from the first calculations in the close coupling approximation using the Breit-Pauli R-matrix method for this ion, all existing theoretical results having been obtained from various other atomic structure calculations. The present work obtains a set of 771 fine structure energy levels with n < 10, l < 9, and 1/2 < J < 17/2, only 52 of which have been observed. The f, S, and A values are reported for 70,372 allowed E1 transitions, exceeding by far those published previously. The calculated fine structure levels have been identified spectroscopically using a procedure based on quantum defect analysis. The energies agree with the available observed energies to within less than one to a few percent. The A values for E1 transitions are in good agreement with other existing values for most transitions. Using the atomic structure code SUPERSTRUCTURE (SS), S and A values are also presented for 38,215 forbidden transitions of the types electric quadruple (E2), electric octupole (E3), magnetic dipole (M1), and magnetic quadrupole (M2) among 274 fine structure levels formed from 25 configurations with orbitals ranging from 1s to 4f. Some of these levels lie above the ionization limit and hence can form autoionizing lines. Such lines for 1s-2p Kα transitions have been observed in experiments. The energies from the SS calculations agree with observed energies within a few percent. The A values for E2 and M1 transitions agree very well with the available values. The atomic parameters for both allowed and forbidden transitions should be applicable for diagnostics as well as complete spectral modeling in the X-ray, ultraviolet, and optical regimes of astrophysical and laboratory plasmas.

This work was partially supported by the NASA APRA program. The computational work was carried out on the Cray X1 at the Ohio Supercomputer Center in Columbus, Ohio.