A Study of the Mussels (Mollusca: Bivalvia: Unionidae) of Symmes Creek and Tributaries in Jackson, Gallia and Lawrence Counties, Ohio. 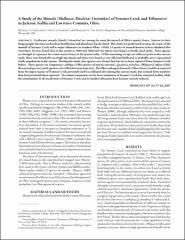 Freshwater mussels (family Unionidae) are among the most threatened of Ohio's aquatic fauna. Interest in their biogeography has increased as their distribution and abundance has declined. This study was performed to assess the status of the mussels of Symmes Creek and it major tributaries in southern Ohio. Of the 24 species of mussels known to have inhabited this watershed, 16 were found alive in the system in 2004 and 2005 and two others were found as freshly dead shells. These species are thought to represent the extant mussel fauna in the system today. Of the remaining six species collected prior to the current study, three were found alive as single specimens and three were found as very old dead shells and so probably never represented viable populations in the system. During this study, four species were found that had never been reported from Symmes Creek before. These species are Simpsonaias ambigua (Ohio species of special concern), Quadrula pustulosa, Obliquaria reflexa (Ohio threatened species), and Ligumia recta (Ohio threatened species). The Ohio endangered mussel, Villosa lienosa, had been reported from the upper reaches of Symmes Creek previously and was collected alive during the current study, but in much fewer numbers than had previously been reported. The mussel community in the lower mainstem of Symmes Creek has remained healthy while the communities in the headwaters of Symmes Creek and its smaller tributaries have become severely reduced.