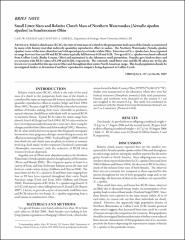 Relative clutch mass (RCM), the ratio of total mass of a clutch to the postpartum body mass of the female, is considered by many a life history trait that indirectly quantifies reproductive effort in snakes. e Northern Watersnake (Nerodia sipedon sipedon) is one of the most abundant and widespread species of snake within Ohio. Litter sizes of N. s. sipedon have been reported to range between four and 99 and RCM values typically fall between 0.20 and 0.38. Two gravid N. s. sipedon were hand collected from Collins Creek (Butler County, Ohio) and maintained in the laboratory until parturition. Females gave birth to three and six neonates with RCM values of 0.108 and 0.120, respectively. The extremely small litter sizes and RCM values are, by far, the lowest ever recorded for this species in Ohio and throughout their entire North American range. This local population should be investigated further to determine if and how reproductive output is being depressed at Collins Creek.