Anna Maria Kobrynska Essenhigh
JavaScript is disabled for your browser. Some features of this site may not work without it. 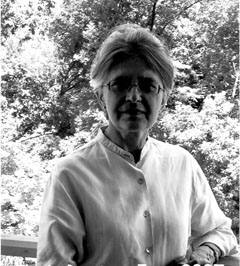 Anna's family left their home town, Pidhaitsi, in Western Ukraine in 1944 when she turned 2½. The Kobrynskis were fleeing west before the advancing Red Army, traveling in small increments from Poland to Romania, Czechoslovakia, Austria, and then to Germany where they ended in the American Zone, in May 1945, when the Allied victory of WWII was proclaimed and where the family became officially 'Displaced Persons'. For Anna, school started in Germany in Laufen, then continued in Belgium in Liege and in Canada in Montreal, and finally in the United States, first in State College, Pennsylvania and then Columbus, Ohio. This background explains Anna's interest in the Ukrainian immigrants in general and those who came to Columbus in particular. Of equal interest is the immigrants' ability to adapt to American life and their contribution to it. In her conversations with them she heard of experiences rich in details, raw in emotions, and sincere in their commitment their new country, and those now form the basis of the stories that are in the OSU Knowledge Bank Collection.