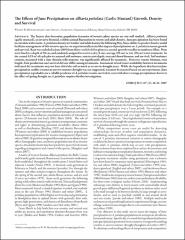 The factors that determine population dynamics of invasive plant species are not well studied. Alliaria petiolata (garlic mustard), an invasive biennial, exhibits annual fluctuation in rosette and adult density. June precipitation has been found to correlate with rosette A. petiolata density in October and adult density the following May. Since ability to predict density would facilitate management of this invasive species, we experimentally tested the impact of precipitation on A. petiolata rosette growth and survival. Rain was excluded in June 2005 from thirty-six 0.8 x 0.8 m plots in a second-growth woodlot in southwest Ohio. Plots were lined to a depth of 20 cm, and randomly assigned to receive a dry (1 cm), average (10 cm) or wet (20 cm) water treatment. In the central 0.25 m2 of each plot we assessed soil moisture, rosette root depth, root and shoot biomass, and survival. Soil moisture content, measured with a time domain reflectometer, was significantly affected by treatment. However, rosette biomass, root length, fruit production and survival did not differ among treatments. Assessment of soil water availability between treatments indicated dry treatments may not have dried the soil as much as occurs in drought years. While the hypothesis that heavier June precipitation enables rosettes to survive summer drought was not supported, it cannot be rejected based on our experiment. June precipitation is probably not a reliable predictor of A. petiolata rosette survival in years with above average precipitation; however the effect of spring drought on A. petiolata requires further investigation.