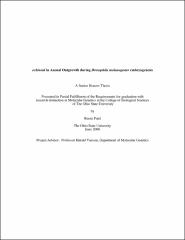 The Notch signaling pathway (NGS) is a major signal transduction pathway, which regulates the development of the nervous system as well as axonal outgrowth in the embryos of Drosophila melanogaster. It is important for cell-cell communication and neuronal precursor cell differentiation. NGS is normally conducted by direct cell-to-cell contact. Signals can be transmitted to neighboring cells where they can activate or suppress a given developmental fate through inter-cellular signal transduction. NGS is also called the Notch cascade because of the series of events that begin extracellularly and end up with changes in gene expressions. One gene that interacts with the NGS is echinoid. It acts as a positive regulator of the Notch pathway where it is thought to be involved in the regulation of the Notch ligand internalization. Notch ligands activate NGS and through a series of catalyzed events the Notch intercellular domain (Nicd) and other transcription factors enter the nucleus and regulates various genes, alter gene expression, and recruit proteins to regulate other signals for neurogenesis. This study attempts to answer a few questions about the role of Echinoid (Ed) during neurogenesis. What is the role of Ed in axonal outgrowth? Whether Ed is present in axon formation? If so, where is Ed present? A large portion of this research has been preliminary work in observing Ed. A main focus has been to find the optimal condition for Ed observation. What fixation time for embryos is best for Ed observation in axons in situ? What protocol is best used for protein isolation? What dilutions are best for Ed antibodies and HRP-antibodies for western blots? This study led to unexpected observations of early embryos. Is Ed localized in the nuclei of early syncytial blastoderms? This new observation has led to many new questions for further work on Ed.