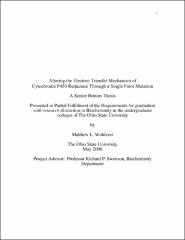 Cytochrome P450 reductase (CPR) is an electron transporter enzyme that plays an essential role in xenobiotic transformations, including metabolism of carcinogens, environmental agents, and drugs. CPR, a membrane bound flavoprotein, contains two flavin cofactors--flavin adenine dinucleotide (FAD) and flavin mononucleotide (FMN)--each bound to a separate protein domain. Both flavin cofactors utilize three distinct oxidation states: oxidized (OX), semiquinone (SQ) (one electron reduced), and hydroquinone (HQ) (two electron reduced). The multiple oxidation states of the flavin cofactors allow CPR to catalyze the essential transfer of electrons from the obligate two-electron donor NADPH to the one-electron acceptor heme-iron of cytochrome P450. A comparison of the FMN-binding domains in various related flavoproteins reveals that the FMN binding loops differ in their size, conformations, and primary structure yet each contains a conserved glycine residue. My research project was designed to evaluate the functional significance of this conserved glycine in rat CPR (Gly-141) through its replacement with threonine using site-directed mutagenesis. This replacement was made in both the intact reductase and the isolated FMN-binding domain (FBD). Based on previous research on the flavodoxin, we hypothesized that the larger, beta-branched side chain of threonine would disrupt the hydrogen bond between residue 141’s carbonyl group and the N5H of the reduced flavin, which should destabilize the functionally relevant semiquinone state. Using a standard steady-state turnover activity assay for cytochrome reduction and the physiological reductant NADPH, the G141T mutant was found to exhibit a specific activity that is 30% less than that of the wild type reductase, indicating that the conserved glycine residue helps modulate electron transfer. A distinctive characteristic of CPR is that the thermodynamically stable neutral FMN SQ serves as the primary electron donor to cytochrome P450. This phenomenon is the direct result of the substantial separation of the midpoint potentials for the OX/SQ and SQ/HQ redox couples (-43 mV and -280 mV, respectively). Reductive titrations of the G141T mutant revealed a significantly lower formation of the FMN SQ at thermodynamic equilibrium in both CPR and the FBD. The direct measurement of the midpoint potentials for this mutant indicated values for the OX/SQ and SQ/HQ couples of -250 mV and -218 mV, respectively. Thus, the midpoint potential for the OX/SQ couple has decreased substantially resulting in a significant loss in stability of the SQ state with the HQ state becoming the most stable thermodynamically. When wild-type CPR is mixed with an equimolar concentration of NADPH in a stopped-flow spectrophotometer, the disemiquinoid species is formed. However, when the experiment is repeated with G141T CPR, the FAD OX, FMN HQ species are preferentially formed. This data suggests that G141T CPR utilizes the FMN HQ as the primary electron donor to the cytochrome rather than the FMN SQ, but apparently in a less efficient manner. Thus the conserved glycine residue plays a critical role in stabilizing the reduced forms of the FMN cofactor, and in determining the mechanism of electron transfer in CPR. Advisor: Dr. Richard P. Swenson