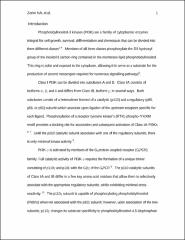 Phosphotidylinositol-3 kinase gamma (PI3K-y), a class IB PI3K that is activated by heterotrimeric G-protein coupled receptors, plays a role in the homing of leukocytes to infected tissues. We analyzed the role of PI3K-y in the development of cutaneous Leishmania mexicana infection in PI3K-y -/- C57BL/6 mice, which model the kinetics of human infection due to the development of chronic non-healing lesions. Leishmania species are obligate intramacrophage parasites. The difference between the thickness of the infected ear and the control ear was used as the measure of infection progression. Following L. mexicana infection, PI3K-y -/- developed smaller lesions containing fewer parasites as compared to wild type mice. Production of TH1 (IL-12 and IFN-g) and TH2 (IL-4 and IL-10) cytokines were also lower in PI3K-y -/- mice, indicating that increased resistance of PI3K-y -/- mice to L. mexicana was not due to enhancement of a TH1-like response. Flow cytometric analysis was performed on cells derived from infected ears using appropriate antibodies to detect macrophages and T-cell subpopulations. Lesions from PI3K-y -/- mice contained approximately half the number of macrophages observed in wild type lesions (1.3X10^5 for PI3K-y -/- versus 4.0X10^5 for wild types). To test the role of PI3K-y in the activation of the oxidative burst, bone marrow-derived macrophages were infected with an excess of Leishmania mexicana promastigotes, and then stimulated with media, IFN-y, IFN-y and LPS. Macrophage-specific cytokines IL-6, IL-10, IL-12, and TNF-a from supernatants were then analyzed. Production of all cytokines were similar at 12 hours for all three stimulation types, but at 24 hours there was a significant increase in the levels of all cytokines in PI3K-y -/- mice but not in WT mice. PI3K-y -/- had fewer infected cells and fewer parasites per cell at 12 hours than WT cells, but at 24 hours an even greater difference was seen with PI3K-y -/- cells showing a 38% infection rate versus 75% and 2.4 parasites per cell versus 3.4. The difference in infection size in vivo can most likely be attributed to a shortage of host cells at the site of infection and an increased ability of infected cells to kill engulfed parasites.