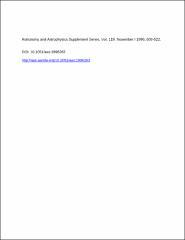 Transition probabilities are obtained for both the dipole allowed (E1) fine structure transitions and the forbidden electric quadrupole and magnetic dipole (E2, M1) transitions in Fe III. For the E1 transitions, ab initio calculations in the close coupling (CC) approximation using the R-matrix method are carried out in LS coupling with a 49-term eigenfunction expansion for Fe IV. The fine structure components are obtained through algebraic transformation of the LS line strengths, and the oscillator strengths and A-coefficients are computed using spectroscopic energies of the observed levels. Radiative transition probabilities for 9797 fine structure E1 transitions corresponding to 1408 LS multiplets among 200 bound states of Fe III are reported. Forbidden E2 and M1 transition probabilities are computed for 362 transitions among the 34 fine structure levels of all 16 LS terms dominated by the 3d^6 configuration using optimised configuration-interaction wavefunctions from the SUPERSTRUCTURE program in the Breit-Pauli approximation. Comparison of the present results is made with previous calculations and significant differences are found. Theoretical line ratios computed using the present E2 and M1 A-coefficients show better agreement with observations for some prominent Fe III lines in the infra-red than those using the earlier data by Garstang (1957). This work is carried out as part of the Iron Project to obtain accurate radiative and collisional data for the Iron group elements.

This work was partially supported by NASA grants NAGW-3315 and NAS-32643 (SNN), and by the US National Science Foundation grant for the Iron Project PHY-9421898 (AKP).