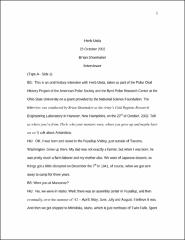 Mr. Herbert T. Ueda (Herb), originally from the Puyallup Valley, Washington, was incarcerated in Japanese-American internment camps during WWII. After the war he held a variety of jobs until drafted into the Army in 1951. After his release from active duty he used the G.I. Bill to obtain a degree in Mechanical Engineering from the University of Illinois. After college, in 1958, he obtained a job at the Snow, Ice and Permafrost Research Establishment (SIPRE) in Wilmette, Illinois. His supervisor for the next several years at SIPRE and at the Cold Regions Research and Engineering Laboratory (CRREL) in Hanover, NH was B. Lyle Hansen. During his career he made 24 trips to Greenland, four to Antarctica and ten to Alaska, working on numerous scientific projects. His first fifteen years were involved in deep ice core drilling with Lyle Hansen, eventually supervising the field operations. In 1966 he and Lyle Hansen led the team that was the first to drill through the Greenland Ice Cap at Camp Century, Greenland, hitting bedrock at 4550 feet – “The most satisfying moment of my career.” Herb then shifted to Antarctica and began drilling at Byrd Station, which he compares to Camp Century. In 1968 he and his team were the first to drill through the Antarctic Ice Sheet at Byrd Station hitting bottom at 7102 feet. He retired from CRREL in 1987 and went to work briefly for the Polar Ice Coring Office (PICO) in Fairbanks, AK as Technical Director in 1989. He returned to Greenland during the first field season of the GISP drilling project.