An analysis of the mechanisms governing species replacements in crayfish 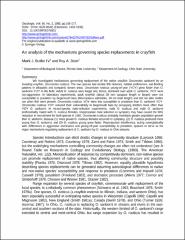