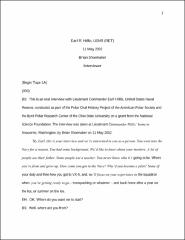 1. Born in Campaign, Tennessee 9/15/33. Grew up in Chattanooga, TN. 2. Attended David Lipscomb College (now Lipscomb University) for one year and Alabama Polytechnic Institute (Auburn University) for one year before entering the NAVCAD Flight Training program of the Navy. 3. Commissioned Ensign and Received wings in June 1956. 4. First duty was with VX-6 for Antarctic research support. 5. Checked out in the Otter and picked up one squadron Otter at DeHaviland factory in Toronto. 6. Otters shipped as deck-load on ships to Antarctica. 7. Hillis sailed on USNS Joseph F. Merrell from Davisville, RI to Antarctica. Merrell escorted through the ice pack by USS Eastwind and USS Glacier. Spent Christmas 1956 in McMurdo . 8. In January 1957 he traveled to Little America where he was assigned. 9. ENS. Hillis flew with LCDR Harvey Speed and ENS. Bill Schick as a co-pilot/navigator. Their plane that they wintered-over with was the Que-Sera-Sera the plane that previously was the first ever to land at the South Pole. Their main responsibility was to support the tractor trains from Little America to Byrd Station (80 degrees south and 120 degrees west). 10. LCDR Hillis gives a good account of the use of the various navigational instruments used to fly around Antarctica – radar (APS-42), N-1 Gyro, Periscopic Sextant, Sun Compass, Ground Patterns in the ice surfaces, RACON Beacon, ADF, and Magnetic compass (“useless in polar regions”). He also comments on the Grid Navigation System in use. 11. Plane hauled fuel to the tractors. 12. Discusses ski landings and ski construction. 13. He was part of three flight crews that wintered-over at LA V. 14. Flew over to LA I, LA II and LA III and opened the tunnels to the old Byrd camps. 15. Flew many cargo flights to South Pole. “All flights were way over-grossed.” ie overweight with cargo ED. 16. Capt Dickey was C.O. of LA V 17. Pilots who wintered-over at LA V: LCDRs Jim Waldron (O-in-C), Harvey Speed, and Bill Schick and Lt Anderson and ENS Aygarn as well as Hillis. 18. Says HAM Radio was extremely important to morale. 19. August 1957 Speed, Schick and Hillis flew back and forth to McMurdo before the sun came up. 20. Describes Otter crash at McMurdo by winter-over crew just before sundown. Said it was probably “avoidable!” 21. Remained “on the ice” until December 1957. Supported science traverses as well as the Byrd Station tractor trains. 22. Orders to FASRON 102 at NAS Norfolk. Flew WV/R7V C-121) for project Magnet for Naval Oceanographic Office in the Arctic. Explains the project. 23. Worked from Thule April 1964 flying infra- red photography of ice pack. 24. Flew ice reconnaissance for submarine USS Sargo’s winter transit through the Bering Strait in Arctic in 1960 using C-121 (WV/R7V) . 25. Flew over North Pole as well as the South Pole. This interview is particularly good in that the interviewee gives a very detailed primer on navigation in the Antarctic. LCDR Hillis was one of the authorities on Antarctic aerial navigation in the IGY era and is eloquent in his explanation on how the different elements of navigation work.