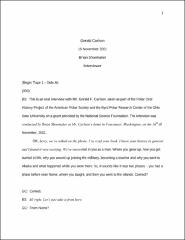 Mr. Carlson was just finishing his BA in Sociology at Washington State University in Pullman, WA in 1951 when he heard About the Alaska Native Services Office of the Department of Interior teaching program for native children. He and his wife Donna both signed up and three days later they were flying north to Alaska. His first year with the service he and his wife were assigned to a native boarding school in White Mountain, Alaska – near Nome. He recounts their experiences teaching grades K-12. There were some 300 Inupiat Eskimo children who boarded at the school. They lived in a dormitory with 10 other teachers and a school nurse. Mr. Carlson recounts the experiences, challenges and problems. He has remained in touch with some of his former students from that time; following their lives and careers. The second year with the Alaskan Native Services Office the Carlsons were assigned to Little Diomede Island where they were the only teachers for all grades K – 12. He tells very engaging story of sailing on the MV North Star from the Alaska mainland to Little Diomede and of having to unload all of their belongings into an umiak (walrus skin canoe) and being taken ashore through a rough surf. He describes Big Diomede, USSR, Little Diomede, USA and the Fairway rock on the Bering Strait. There were 130 Inupiat on Little Diomede – 35 were students from K-8 in a one-room schoolhouse. The schoolhouse served as the Carlson’s home – it was the only square building on the island except for a small church built by the famous Father Tom Cunningham. Their only contact with the outside world was with the school’s short-wave radio. The Inupiat lived in stone igloos – very primitive. Again he discusses the challenges of teaching. The MV North Star visited the island twice each year – first when the ice broke up in the Bering Strait and in late summer as it was heading south out of the Chukchi Sea. He discusses the problems teaching. First he had to adapt to local needs – the primary one was getting in 180 days of teaching before walrus migration began in the spring. That was when everyone was needed to help with the annual walrus hunt – therefore it was necessary to teach trough holidays and some weekends. He reports that the kids really wanted to learn and that there were no discipline problems. Beginning students had to be taught English because their primary language was inupiat. He had many other duties that he had to learn on the job – like radio operator (the only means of communication with the outside world) and surgeon since there was no medical care. There were problems with alcohol with the adults (until it was completely consumed) and the frightened children stayed in the school with the Carlsons until the sprees were over. He describes seal hunts on the sea ice and walrus hunts by umiak. Donna Carlson became pregnant and at the end of the school year the Carlsons elected to leave in the fall of 1954. They describe sailing across the Bering Strait to Cape Prince of whales in an umiak and from there flying to Nome and back to the State of Washington The Carlsons returned to Little Diomede 40 years later in 1993 and noted the changes. People lived in houses. There was a grammar school with six elementary teachers as well as a high school with four teachers. There was telephone service. Etc. Dramatic changes. Gerry Carlson has written a very humorous book, Two on the Rocks, about his experiences on Little Diomede. A copy is appended to Carlson’s file. Those interested in purchasing a copy may order Two on the Rocks by Gerald F. Carlson, ISBN: 1-58721-680-9. Library of Congress card Number 66-25144