On the Pitting Resistance of Sputter-Deposited Aluminum Alloys 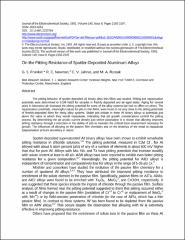 The pitting behavior of sputter-deposited Al binary alloy thin films was studied. Pitting and repassivation potentials were determined in 0.1M NaCl for samples in freshly deposited and air-aged states. Aging for several years in laboratory air increased the pitting potential for some of the alloy systems but had no effect on others. The repassivation potentials, meaningful values for pits in thin films, were found to be very close to the pitting potentials of freshly-deposited films for many alloy systems. Stable pits initiate in these Al binary alloys at potentials just above the value at which they would repassivate, indicating that pit growth considerations control the pitting process. By determining the pit anodic current density just before passivation it is shown that alloying improves pitting resistance through a reduction in the ability of pits to maintain the critical local environment necessary for growth. The influences of alloying on the passive film chemistry and on the tendency of the metal to repassivate (depassivation pH) are secondary in nature.