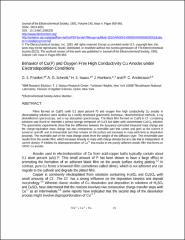 Films formed on Cu(P) (with 0.1 atom percent P) and oxygen free high conductivity Cu anodes in electroplating solutions were studied by a newly developed gravimetric technique, electrochemical methods, x-ray photoelectron spectroscopy, and x-ray absorption spectroscopy. The black film formed on Cu(P) in Cl^− -containing solutions was found to resemble a porous sponge composed of CuCl but laden with concentrated CuSO_4 solution. The gravimetric experiments show that the difference between the buoyancy-corrected measured mass change and the charge-equivalent mass change has two components: a reversible part that comes and goes as the current is turned on and off, and an irreversible part that remains on the surface and increases in mass with time as dissolution proceeds. The reversible part of the mass change arises from the weight of the diffusion layer. The irreversible part results from the anodic film, which increases linearly in mass with charge density but at a rate that is independent of current density. P inhibits the disproportionation of Cu^+1 that results in the poorly adherent anodic film that forms on OFHC Cu anodes.