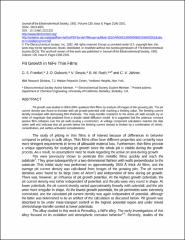 Pit growth was studied in 80Ni-20Fe sputtered thin films by analysis of images of the growing pits. The pit current density was found to increase with pit growth potential until reaching a limiting value. The limiting current density increased with decreasing film thickness. The mass-transfer resistance to the active pit wall exceeds by an order of magnitude that predicted from a simple radial-diffusion model. It is suggested that the undercut, remnant passive film collapses over the pit wall causing a constriction. A voltage component calculation matches the data rather well and indicates that pit growth below the limiting current density is limited by a combination of ohmic, concentration, and surface activation considerations.