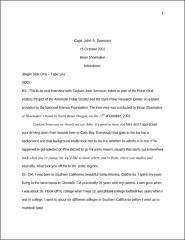 Abstract of Contents: Capt Svensson’s (John) career began in Antarctica when he was stationed in McMurdo Station with the Naval Support Force Antarctica as a Sea Bee surveyor. He left the Navy in 1964 and landed a job at the Arctic Section of the Department of Oceanography of the University of Washington working with Dr. Larry Coachman. While at the University of Washington he served as “Scientific Cruise Leader” for numerous projects in Arctic seas. He left the University of Washington in 1970 after breaking his leg and became a commercial fisherman: The following is succinct: 1. John grew up in Santa Monica. Joined the Navy as a Sea Bee in 1961. Assigned to duty in McMurdo Station, Antarctica in 1963 and wintered-over there. Surveyed in runways at the end of the winter. Discusses Russian visit to McMurdo, life at station and work with scientists there. Left the Navy in 1964 when his tour of duty was over. 2. Shortly after leaving the Navy John landed a job with the University of Washington Department of Oceanography (Dr. Larry Coachman). He traveled to Ice Station T-3 iceberg station via the Naval Arctic Research Laboratory in October1966 and served as Dr. Coachman’s “Scientific Cruise Leader” until January 1968. He describes the scientific work there – not just his own, but other programs as well since he was curious and helped everyone with their work. He also gave some good descriptions of some facets of life on the floating iceberg station 3. In the summer of 1968 John served as the “Scientific Cruise Leader” for the University of Washington aboard the USCGC Staten Island in the Bering Sea. The research involved current measurements at 60 stations in the Bering Sea – some deep-sea currents over 3 knots. Describes 4. In the fall of 1969 John was in charge of the Davis Strait Project whereby they were measuring currents in polynas. He broke is leg and the project was terminated. Unfortunately his career at the University of Washington was interrupted because the leg did not heal satisfactorily and limited him to some degree. 5. Later life: a. Returned to College and obtained a MS in Public Administration. b. Taught high school at Franklin High School in Seattle. c. Involved with Yacht racing (32’ keel boats). d. Finally wound up as a commercial fisherman. He bought his own boat and has been very successful. He attributes his success to the current measurement research that he did from T-3 in the Arctic and from icebreakers in the Bering Sea.