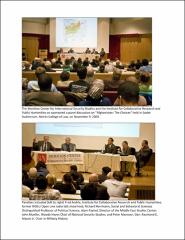 Should we alter our strategy, stay the course, bring our troops home, increase their number? Afghanistan: The Choices is an interdisciplinary discussion of the way forward for the United States in Afghanistan, with a panel of leading Ohio State experts (Richard Herrmann, Peter Mansoor, John Mueller, and Alam Payind), moderated by Fred Andrle. In August 2009, Gen. Stanley McChrystal, commander of U.S. and NATO forces in Afghanistan, submitted a report to be reviewed by President Barack Obama and his top national security advisers. In his report, Gen. McChrystal gave a grim assessment of the conflict in Afghanistan and later requested 40,000 more troops be sent to fight the Taliban-led insurgency, bringing the total number of U.S. and NATO forces in Afghanistan to 108,000. The possibility that more troops will be needed to ensure success in Afghanistan has presented the Obama administration with a number of challenges and new considerations in dealing with a conflict that Obama has called the central front in the war on terror. Besides facing pressure from both conservatives and members of his own party, Obama is also facing new questions over the credibility of the Afghan government compounded with mounting American and NATO casualties. Afghanistan: The Choices will explore the future of the United States involvement in Afghanistan through an interdisciplinary discussion of strategies for success in Afghanistan. The panelists will discuss and answer questions relating to the application of a more comprehensive counterinsurgency strategy, implications of the U.S. presence on the Taliban insurgency, the level of U.S. forces in Afghanistan, and the national security interest of the United States in Afghanistan.