The Emotional Politics of Transnational Crime 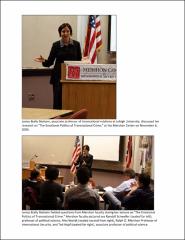 Janice Bially Mattern is associate professor of international relations at Lehigh University. Her research focuses on the social dynamics of world political orders and their transformations. She teaches courses on international relations theory, criminality and transnational crime, international ethics, sovereignty, as well as international organization, especially global governance and transformations in world order. Her current project, tentatively entitled Illicit Sovereigns, examines the role of emotion in mobilizing transnational crime networks to transnational political violence. Bially Mattern is the author of Ordering International Politics: Identity, Crisis, and Representational Force (Routledge, 2005). She has written a number of journal articles and book chapters on topics ranging from soft power and language power to the politics of identity. She previously worked as a political risk analyst in New York City and as a policy analyst in Washington, D.C., during which time she co-authored Measuring National Power in a Post-Industrial Age (RAND, 2000). Bially Mattern received her B.A. in Political Science and International Relations at the University of Wisconsin at Madison. She studied International Relations at Yale Unviersity, receiving her M.A., her M.Phil., and her Ph.D., which was awarded with distinction in December 1998.