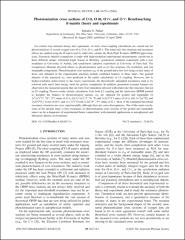 For crucial tests between theory and experiment, ab initio close-coupling calculations are carried out for photoionization of several oxygen ions: O II, O III, O IV, and O V. The relativistic fine-structure and resonance effects are studied using the R matrix and its relativistic variant, the Breit-Pauli R-matrix (BPRM) approximations. Extremely detailed comparison is made with high-resolution experimental measurements carried out in three different setups: Advanced Light Source at Berkeley, synchrotron radiation experiment with a new modulator at University of Aarhüs, and synchrotron radiation experiment at University of Paris-Sud. The comparisons illustrate physical effects in photoionization such as (i) fine structure, (ii) resolution, and (iii) metastable components. Photoionization cross sections σ_PI of the ground and a few low-lying excited states of these ions obtained in the experimental spectrum include combined features of these states. The general features of the measured σ_PI were predicted in the earlier calculations in LS coupling. However, due to higher-resolution achievement in the recent experiments, the theoretically calculated resonances need to be resolved with much finer energy mesh for precise comparison. In addition, prominent resonant features are observed in the measured spectra that can form from transitions allowed with relativistic fine structure, but not in LS coupling. Present results include calculations from both LS coupling and the relativistic BPRM method to decipher the features in photoionization spectra. σ_PI are obtained for ground and metastable (i) 2s^2 2p^3(^4 Sº, ^2 Dº, ^2 Pº) states of O II, (ii) 2s^2 2p^2(^3 P, ^1 D, ^1 S) and 2s2p^3(^5 Sº) states of O III, (iii) 2s^2 2p(^2 Pº_J) and 2s2p^2(^4 P_J) levels of O IV, and (iv) 2s^2(^1 S) and 2s2p(^3 Pº, ^1 Pº) states of O V. Most of the computed theoretical resonance structures are seen experimentally, although there are some discrepancies. One of the main conclusions of the present study is that resonances in photoionization cross sections of the ground and metastable states can be a diagnostic of experimental beam composition, with potential applications to astrophysical and laboratory plasma environments.

This work was partially supported by the National Science Foundation and the NASA Astrophysical Theory Program.