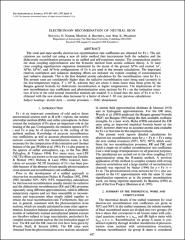 The total and state-specific electron-ion recombination rate coefficients are obtained for Fe I. The calculations are carried out using a new ab initio method that incorporates both the radiative and the dielectronic recombination processes in an unified and self-consistent manner. The computations employ the close coupling approximation and the R-matrix method from atomic collision theory. A 52 state close coupling eigenfunction expansion dominated by the states of the ground 3d^6 4s and excited 3d^7, 3d^6 4p, 3d^5 4s^2, and 3d^5 4s4p configurations of Fe II are used in the present calculations. The important electron correlation and radiation damping effects are included via explicit coupling of autoionization and radiative channels. This is the first detailed atomic calculation for the recombination rates for Fe I. The present rates are considerably higher than the radiative recombination rates being used currently in the low-temperature region, T ≤ 10^4 K, whereas they are about 4 times lower than those given by the Burgess general formula for dielectronic recombination at higher temperatures. The implications of the new recombination rate coefficients and photoionization cross sections for Fe I on the ionization structure of iron in the cold neutral interstellar medium are studied. It is found that the ratio of Fe II to Fe I obtained with the new atomic data increases by a factor of about 3-30 over previous calculations.