The Transformative Election of 2008 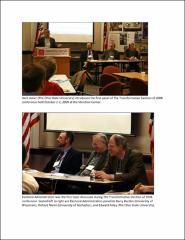 This conference will examine the 2008 presidential campaign and election, analyzing the foreign and military policy debates as well as the voting trends that remade the image of the U.S. abroad. The 2008 U.S. presidential election took place against the backdrop of the continuing wars in Iraq and Afghanistan, as well as a domestic financial crisis. The two major-party candidates secured their nominations in large part because of their stances on the wars. Discussion of foreign and military policies became paramount throughout the campaign. Few disputed that America's popularity abroad had declined during the George W. Bush years. This conference will examine how the change in the party controlling the White House, the accession of an opponent of the Iraq War, and the election of the first African-American President of the United States changed perceptions of the United States around the world. Topics raised by the 2008 campaign and election are crucial for academic understanding of elections. The role of issues versus candidate characteristics remains a topic of interest, especially in relation to race in the 2008 election. There is also reason to be concerned about voting turnout levels in the United States, particularly since they continue to be lower than in most other democracies. Such discussions will be explored in depth throughout this conference.

Video requires RealPlayer to view
The University Archives has determined that this item is of continuing value to OSU's history.