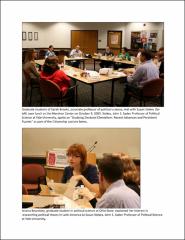 Susan Stokes is John S. Saden Professor of Political Science at Yale University. She is also Director of the Yale Program on Democracy and Chair of the Department of Political Science. Her research interests include democratic theory and how democracy functions in developing societies, with a focus on Latin America. She teaches courses on Latin American politics and development, political parties and democracy, and clientelism, patronage, and vote buying. Stokes is co-author of Democracy and the Culture of Skepticism: Political Trust in Argentina and Mexico (Russell Sage Foundation, 2006). Her book, Mandates and Democracy: Neoliberalism by Surprise in Latin America (Cambridge, 2001), received prizes from the APSA Comparative Democratization section and from the Society for Comparative Research. Her other recent publications include "Perverse Accountability" in the American Political Science Review and "Endogenous Democratization" with Carles Boix in World Politics. Stokes's research has been supported by the National Science Foundation, the Guggenheim Memorial Foundation, the MacArthur Foundation, the American Philosophical Society, and the Russell Sage Foundation. Stokes received her Ph.D. in Political Science from Stanford University in 1988.