Lifting the Veil on Fashion: Filling the Gaps Between Modesty and Fashion Apparels 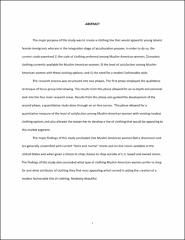 The major purpose of this study was to create a clothing line that would appeal to young Islamic female immigrants who are in the integration stage of acculturation process. In order to do so, the current study examined 1) the style of clothing preferred among Muslim-American women; 2) modest clothing currently available for Muslim-American women; 3) the level of satisfaction among Muslim-American women with these existing options; and 4) the need for a modest fashionable style. The research process was structured into two phases. The first phase employed the qualitative technique of focus group interviewing. The results from this phase allowed for an in-depth and personal look into the four main research areas. Results from this phase also guided the development of the second phase, a quantitative study done through an on-line survey. This phase allowed for a quantitative measure of the level of satisfaction among Muslim-American women with existing modest clothing options and also allowed the researcher to develop a line of clothing that would be appealing to this market segment. The major findings of this study concluded that Muslim-American women feel a disconnect and are generally unsatisfied with current "brick and mortar" stores and on-line stores available in the United States and when given a choice to shop choose to shop outside of U.S. based and owned stores. The findings of this study also concluded what type of clothing Muslim-American women prefer to shop for and what attributes of clothing they find most appealing which served in aiding the creation of a modest fashionable line of clothing, Modestly Beautiful.