Using Memory Books to Enhance Sense of Self 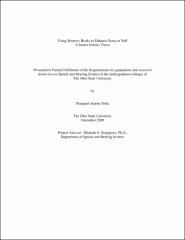 The purpose of this study was to explore the preservation of self-identity in a person with early onset dementia using a memory book. Symptoms of dementia are visible by outsiders because of behavior changes. These changes in the person with dementia cause doubt in sense of self and self-identity. The memory book created was to study the effect of visual cues in the form of sentences and pictures about the person’s personal accomplishments. A single participant with moderate dementia was made a memory book about self-identity and conversational sessions were analyzed with and without the memory book. Conversations between the participant and a single researcher lasted five minutes each for a total of eight sessions. The results revealed that in the presence of a memory book as an intervention tool, positive statements about self-identity increased along with the person’s ability to communicate their thoughts effectively. Negative statements and ambiguous statements decreased in the presence of the memory book. In addition, the participant demonstrated the ability to maintain quality conversations without few errors. Due to these promising results, this study should be replicated with more subjects with dementia and a wider range of dementia severity in the future.