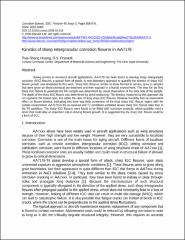 The authors acknowledge funding from the Aging Aircraft Division of ASC in support of the Aeronautical Enterprise Structures Strategy with a contract through S & K Technologies.