Effect of applied tensile stress on intergranular corrosion of AA2024-T3 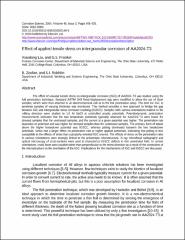 The effect of uniaxial tensile stress on intergranular corrosion (IGC) of AA2024-T3 was studied using the foil penetration technique. Standard ASTM G49 fixed-displacement jigs were modified to allow the use of sheet samples, which were then attached to an electrochemical cell as in the foil penetration setup. The time for IGC to penetrate samples of varying thickness was monitored. This method provides a new approach to bridge the gap between IGC and intergranular stress corrosion cracking (IGSCC). Samples with various orientations relative to the rolling direction were studied in 1.0 M NaCl at controlled anodic potentials. Potentiodynamic polarization measurements indicated that the two breakdown potentials typically observed for AA2024-T3 were lower for stressed samples than for unstressed samples, and the current at a given potential was higher. The penetration rate depended on potential and was higher for stressed samples than for unstressed samples. The primary form of attack above the higher breakdown potential was IGSCC, whereas pitting dominated between the two breakdown potentials. Stress had a larger effect on penetration rate at higher applied potentials, indicating that pitting is less susceptible to the effects of stress than a properly oriented IGC crevice. The effects of stress on the penetration rates in various orientations were strongly linked to the anisotropic microstructure. X-ray microfocal radiography and optical microscopy of cross-sections were used to characterize IGSCC defects in thin penetrated foils. In certain orientations, crack faces were parallel rather than perpendicular to the stress direction as a result of the constraints of the microstructure on the orientation of the IGC. Implications for the mechanisms of IGC and IGSCC are discussed.

This work was supported by the United States Air Force Office of Scientific Research through Grant No. F49620-02-1-0148.