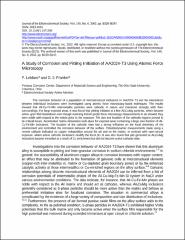 The corrosion behavior of a population of microstructural inclusions in AA2024-T3 and the interactions between individual inclusions were investigated using atomic force microscopy-based techniques. The results showed that Al-Cu-Fe-Mn intermetallic particles were cathodic in nature and interacted strongly with their surroundings. For large exposed areas, it was found that pitting initiated at a few Al2CuMg particles, which became active upon film breakdown even though scanning Kelvin probe force microscopy measurements in air showed they were noble with respect to the matrix prior to the exposure. The size and location of the cathodic regions proved to be critical issues. Accelerated matrix dissolution took place for exposed areas containing a large area fraction of Al-Cu-Fe-Mn inclusions. The location of the cathodic sites had a strong influence on the local chemistry of the environment and controlled the corrosion behavior of the surface. Potentiodynamic measurements made using a remote cathode indicated no copper redeposition around the pit and on the matrix, in contrast with open-circuit exposure, where active cathodic inclusions modify the local pH. It was also found that pits generated at Al2CuMg inclusions became ennobled as a result of Cu enrichment but did not become active cathodic sites.

This work was supported by the United States Air Force Office of Scientific Research under contract no. F49620-96-1-0479.