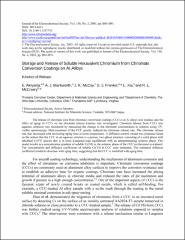 The release of chromate ions from chromate conversion coatings (CCCs) on Al alloys was studied, and the effect of aging of CCCs on the chromate release kinetics was investigated. Chromate release from CCCs into aqueous solutions was monitored by measuring the change in the chromate concentration in solution using UV-visible spectroscopy. Heat-treatment of the CCC greatly reduced the chromate release rate. The chromate release rate also decreased with increasing aging time at room temperature. A diffusion-control model was proposed based on the notion that the CCC in an aqueous solution is a porous, two-phase structure consisting of a solid phase with adsorbed Cr(VI) species that is in local Langmuir-type equilibrium with an interpenetrating solution phase. This model results in a concentration gradient of soluble Cr(VI) in the solution phase of the CCC as chromate is released. The concentration and diffusion coefficients of soluble Cr(VI) in CCC were estimated. The estimated diffusion coefficient tended to decrease with aging time, suggesting that the CCC is modified with aging time.