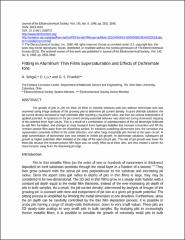 The growth of pits in 209 nm thick Al films in chloride solutions with and without dichromate ions was examined using image analysis of the growing pits to determine pit current density. In pure chloride solutions, the pit current density decreased at high potentials after reaching a maximum value, and then was almost independent of applied potential. A hysteresis in the pit current density-potential behavior was observed during downward stepping of the potential from high values. This is a result of a combination of supersaturation of the pit electrolyte followed by salt film formation, and changes in mass transport from hydrogen bubbles that increase convection and lift the remnant passive film away from the dissolving surface. In solutions containing dichromate ions, the corrosion and repassivation potentials shifted in the noble direction, and rather large metastable pits formed at the open circuit. A large concentration of dichromate ions was needed to inhibit pit growth. In dichromate solutions, subsequent pit growth at higher potentials often initiated at the edge of the open-circuit pits. The rate of pit growth was lower for these pits because the remnant passive film layer was not easily lifted up at these sites, and thus created a barrier for mass transport away from the dissolving pit edge.

This work was supported by Major H. DeLong at the United States Air Force Office of Scientific Research under contract F49620-96-0042.