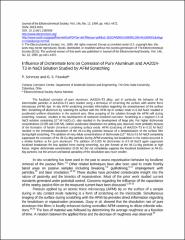 The localized corrosion of pure aluminum, AA2024-T3 alloy, and in particular the behavior of the intermetallic particles in AA2024-T3 were studied using a technique of scratching the surface with atomic force microscopy (AFM) tips. In situ AFM scratching provides information regarding the protectiveness of the surface film. Scratching of aluminum by rastering the surface with the AFM tip in contact mode in 0.5M NaCl resulted in accelerated uniform dissolution in the rastered area. Slow pumping of the solution through the AFM cell during scratching, however, resulted in the development of sustained localized corrosion. Scratching in a stagnant 0.5 M NaCl solution containing 10-4 M Na2Cr2O7 also resulted in the development of large pits. For higher dichromate concentrations (0.005 and 0.05 M), neither accelerated dissolution nor pitting was observed, most probably because of the formation of harder chromium containing surface oxide. AFM scratching of AA2024-T3 in 0.01 M NaCl resulted in the immediate dissolution of the Al-Cu-Mg particles because of a destabilization of the surface film during light scratching. The addition of very dilute concentrations of dichromate (10-4 M) to 0.5 M NaCl completely suppressed the corrosion of the Al-Cu-Mg particles during AFM scratching, but breakdown in the matrix occurred in a similar fashion as for pure aluminum. The addition of 0.005 M dichromate to 0.5 M NaCl again suppressed localized breakdown for low applied force during scratching, but pits formed at the Al-Cu-Mg particles at high forces. Higher dichromate concentration (0.05 M) did not completely suppress the localized breakdown at Al-Cu-Mg particles, but the amount and lateral spreading of the dissolution was much smaller.

This work was supported by Major H. DeLong in the Air Force Office of Scientific Research under contract F49620-96-1-0479.