The Effects of Visual Stimuli on Conversations in Dementia 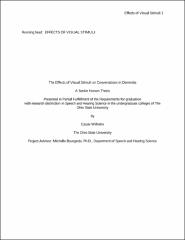 ABSTRACT Dementia is characterized by difficulty with communication tasks, such as generating ideas and conveying meaning, as well as memory deficits such as word finding difficulties and repetitive behavior (Bourgeois & Hickey, 2009). Memory Books are used as written and graphic cues to support memory and conversation for persons with dementia (Bourgeois, 2007). The purpose of this study was to examine the relative benefits of different types of stimuli found in Memory Books that patients can use in conversation. The questions addressed were: How do different types of stimuli affect the conversations of patients with dementia? Is print alone better? Are pictures alone better? Or does the combination of print and picture stimuli together help the individual to participate in the best conversations? After receiving consent from a family member, each subject was made three different versions of a Memory Book. One version had only pictures, one only sentences and the last was a combination of the two, all with ten facts, one per page. Three experimental sessions were conducted with each subject on separate days. In each session, the three different books were presented in counter-balanced order to elicit 5 minutes of conversation each. In between each type of book, a 10 minute distraction activity was administered, such as games or puzzles. Data analysis revealed that persons with dementia produced more novel utterances, and other positive conversational features, when using Memory Books with both pictures and text in combination than when conversing with Memory Books consisting of pictures alone or text alone.