The Price of (Perceived) Affordance: Commentary for Huron and Berec 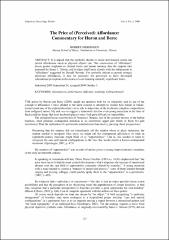 It is argued that the symbolic objects in music and musical scores can permit affordances much as physical objects can. This construction of "affordance" places greater emphasis on cultural forms and human memory than the original idea proposed by James J. Gibson, and it aligns itself more closely with the refinements to "affordance" suggested by Donald Norman. For symbolic objects to permit strongly perceived affordances, it may be necessary for perceivers to have developed schematized perception in the course of over-learning culturally significant forms.