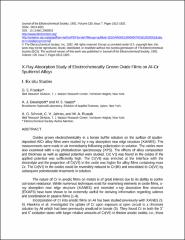 Oxides grown electrochemically in a borate buffer solution on the surface of sputter-deposited AlCr alloy films were studied by x-ray absorption near edge structure (XANES). The measurements were made in air immediately following polarization in solution. The oxides were also examined with x-ray photoelectron spectroscopy (XPS). The effects of alloy composition and thickness as well as applied potential were studied. Cr( VI) was found in the oxides if the applied potential was sufficiently high. The Cr(VI) was enriched at the interface with the electrolyte and the proportion of Cr(VI) in the oxide was higher for alloy films containing more Cr. The Cr(VI) in the oxides could be reversibly reduced to Cr(III) and reoxidized to Cr(VI) by subsequent potentiostatic treatments in solution.