Corrosion and Passivation of Fe and FeN Films 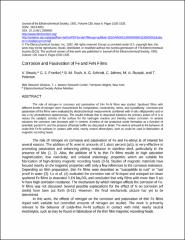 The role of nitrogen in corrosion and passivation of thin Fe-N films was studied. Sputtered films with different levels of nitrogen were characterized for composition, conductivity, stress, and crystallinity. Corrosion and passivation of the films were evaluated by electrochemical measurements combined with in situ ellipsometry and ex situ x-ray photoelectron spectroscopy. The results indicate that in deaerated solutions the primary action of N is to reduce the catalytic activity of the surface for the hydrogen reaction and thereby reduce corrosion. In aerated solutions the corrosion rate increases with N content. Kinetics of the protective oxide formation as a function of potential, percent N, and the presence of borate buffer are discussed in detail. The work is relevant to the behavior of oxide-free Fe-N surfaces in contact with mild, nearly neutral electrolytes, such as could be used in fabrication of magnetic recording heads.