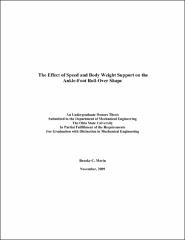 Body weight supported treadmill training (BSWTT) is a method of gait rehabilitation for neurological injuries such as incomplete spinal cord injury and stroke. During this therapy, patients placed over a treadmill have a portion of their body weight supported with a harness, and trained therapists provide manual assistance as necessary to promote upright posture and lower-extremity trajectories associated with normal gait. Despite its prevalence, much is still unknown about the effects on gait of key BWSTT parameters, such as treadmill speed and the percentage of body weight support (BWS). Successful rehabilitation with BWSTT depends on accurately replicating the forces and motions present during normal locomotion. A single measure that expresses the relationship between these terms is the ankle-foot (AF) roll-over shape, defined as the circular arc formed when the center of pressure (COP) is transformed into a shank-based coordinate system. This shape is suggested to be clinically invariant under a variety of walking conditions. Thus, changes in the AF roll-over shape with BWS may indicate that the relationship between the forces and motions associated with normal walking is altered during BWSTT. This study seeks to determine the effect of BWS on the radius of the AF roll-over shape and the anterior location of its center. We tested seven subjects on an instrumented treadmill at 3 speeds (50%, 100%, and 150% of a self-selected speed) and with a harness providing 4 levels of body weight support (0%, 30%, 50%, and 70% of the subject’s weight). We found that, contrary to the previously found invariance of the AF roll-over shape, the shape did change with speed, body weight support, and the interaction between the two. This variability was most pronounced at the highest levels of speed and body weight support. Thus, the ankle-foot roll-over shape may not be an invariant metric when BWS is applied.