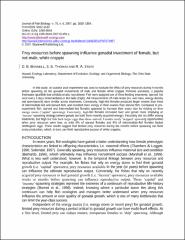 In this study, an outdoor pool experiment was used to evaluate the effect of prey resources during 4 months before spawning on the gonadal investments of male and female white crappie Pomoxis annularis, a popular freshwater sportfish that exhibits erratic recruitment. Fish were assigned one of three feeding treatments: starved, fed once every 5 days (intermediate) or fed daily (high). All measurements of male testes (i.e. wet mass, energy density and spermatocrit) were similar across treatments. Conversely, high-fed females produced larger ovaries than those of intermediate-fed and starved fish, and invested more energy in their ovaries than starved fish. Compared to pre-experiment fish, starved and intermediate-fed females appeared to increase their ovary size by relying on liver energy stores (‘capital’ spawning). Conversely, high-fed females increased liver and gonad mass, implying an ‘income’-spawning strategy (where gonads are built from recently acquired energy). Fecundity did not differ among treatments, but high-fed fish built larger eggs than those starved. Females rarely 'skipped' spawning opportunities when prey resources were low, as only 8% of starved females and 8% of intermediate-fed females lacked vitellogenic eggs. These results suggest that limited prey resources during the months before spawning can limit ovary production, which, in turn, can limit reproductive success of white crappies.

This research was funded by Federal Aid in Sport Fish Restoration Project F-69-P, administered jointly by United States Fish and Wildlife Service and Ohio Department of Natural Resources, Division of Wildlife, and the Department of Evolution, Ecology, and Organismal Biology at The Ohio State University.