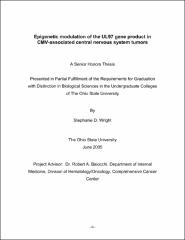 Gliomas are the most common primary central nervous system (CNS) tumor and are associated with a particularly poor prognosis despite the advances of multimodality therapy. Recent work demonstrating an association between gliomas and cytomegalovirus (CMV) infection has led us to postulate that modulation of key viral gene products presents an attractive opportunity to selectively deliver therapy to this refractory CNS tumor. We hypothesize that drugs capable of targeting epigenetic processes will provide antitumor activity while simultaneously inducing viral gene products that can subsequently be targeted by a variety of agents including nucleoside analogues. Here we provide data demonstrating that drugs with histone deacetylase inhibitor (HDACi) activity facilitate glioblastoma cell cycle arrest and apoptosis in vitro. The glioma cell lines, Gli3605 and U251, and the neuroblastoma lines, NB11 and NB11 CMV were used in experiments to test our hypothesis. All lines treated with the HDACi depsipeptide or HDACi 42 underwent induction of programmed cell death in a dose-dependent fashion. However, the CMV-infected NB11 cell line demonstrated increased resistance to HDACi-mediated apoptosis. Treatment of the NB11 CMV cell line with doses of depsipeptide and HDACi 42, previously shown to inhibit histone deacetylase activity, resulted in the induction of the CMV protein kinase UL97 in a dose-dependent fashion. Addition of the nucleoside analogue ganciclovir (GCV) to HDACi-treated cells resulted in enhanced cell death that selectively occurred in NB11 CMV cells but not the parental line NB11 suggesting a CMV-specific effect. These data support consideration of combined use of histone deacetylase inhibitors and antiviral compounds in cytomegalovirus-associated malignant brain tumors. Studies are in progress to further characterize (i) mechanism(s) leading to enhanced HDACi-mediated UL97 expression, (ii) whether CMV-infected glioblastoma cell lines demonstrate similar findings and (iii) the effect of this combination treatment strategy in an in vivo model of PCNS-glioblastoma.