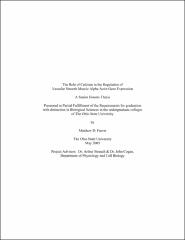 The heart is a dynamic organ that is made up of multiple cell types including muscle and non-muscle. In general the heart is capable of changing due to many factors including development, physiological response, and pathological conditions. Fibrotic (scarring) and hypertrophic (increase in cell size) diseases of the heart are often associated with messengers (such as calcium (Ca2+)) and pathways that activate proteins normally expressed only in the developing heart. One of these proteins, vascular smooth muscle alpha actin (SMA), is the predominant actin in smooth muscle, but is not normally expressed in the adult heart. However, SMA is activated in response to heart transplant and the associated rejection process (fetal reactivation). The focus of this project is to determine the role of Ca2+ in the regulation of SMA in resident non-muscle cell types of the heart. By using cultured cells we have determined that Ca2+ levels and/or Ca2+ agonists effect previously identified transcription factors that bind to the SMA promoter. In addition, regulation of at least one of these transcription factors, YB-1, in non-muscle cells may be controlled by its relative concentration within the nucleus and cytoplasm. A better understanding of the transcriptional factors regulated by Ca2+ and those associated with fetal gene reactivation will give a better understanding of SMA and its relation to cardiac disease.