When Being Good is Good… and Bad: The Dilemma of Asian Americans as the Model Minority in the United States 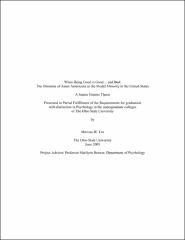