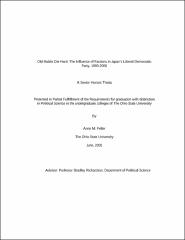 Factions have dominated Japan's Liberal Democratic Party (LDP) since its inception in 1995. During these postwar years, factions have been portrayed as institutionalized structures used for the distribution of party positions, cabinet appointments, and campaign funds. However, little is known about the influence of factions after the LDP's 1993 split and Japan's 1994 electoral reforms. Both scholars and the public believed these two colossal events would eliminate the LDP's need for factions. Nevertheless, factions continue to flourish in the LDP and significantly impact Japanese politics. This paper will provide an update on the recent activities of the LDP's factions and their impact in areas such as cabinet appointments. Ultimately, I will argue that factions have become institutionalized in the LDP through a combination of historical precedents, party size, and Japan's unique group structure.

Except where otherwise noted, this item's license is described as Attribution-ShareAlike 2.5 Generic