The impact of gender, family, and mental health issues on displays of relational aggression in a sample of court-involved youth 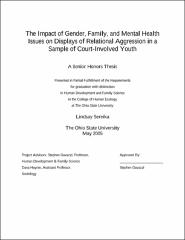