Memories of East German childhood: Popular representations of the contested past 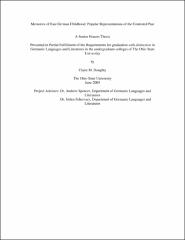 My thesis examines representations of East German childhood in contemporary German literature and film. In my discussion of individual texts and films, I show that through descriptions of personal childhood these works call attention to the rapid disappearance of East German culture following German unification and challenge popular modes of discussing the East German past. As well as drawing in controversial notions of nostalgia as it relates to discredited political systems, I reveal how the representation of childhood experiences contributes to contemporary discourse on history, cultural identity, and the preservation of memory. My project will focus on the relevance of individual texts and films within their specific social and political environment, and the degree to which they further the development of a distinct East German identity by developing nuanced depictions of the past.